Using digital technology to pursue global tax evaders and other corrupt financial actors was a much-discussed topic at last month’s International Anticorruption Conference—the largest and most influential assembly of its kind for nearly 40 years. Mind-boggling complexity and opacity characterize much of the “planning” that some multinational corporations, billionaires, and global criminals have used in recent years to hide $50 trillion in wealth from government authorities and to evade or avoid $480 billion in tax each year.

Leaders distilled the conference’s key findings into an 11-point “Washington Declaration” that included this conclusion: “Governments should enhance digital governance and regulatory mechanisms based on the principles of transparency, accountability and integrity, including for artificial intelligence, blockchain and distributed ledger technology , and big data.”

The challenge is clear. The public sector and civil society must either tap quickly into transformative digital technology or concede the anticorruption fight to the small number of bad actors in the private sector who take trillions of dollars from the world’s people.

To curb global tax avoidance, evasion, and other illicit financial flows, governments must develop and deploy sophisticated technology tools. It is essential that they attract collaboration from leading technologists in academia and the private sector.

A group of top data scientists and anticorruption activists at an IACC workshop analyzed the potential to marry science and activism in the fight against global financial corruption. The group, called Tech for Transparency Initiative, released and presented its conclusions in a report, “In Pursuit of the Hidden Economy.”

The report proposed that the ability of government (and civil society) to identify the ultimate beneficial ownership of legal entities and major assets—often referred to as beneficial ownership—is central to any effort to counter tax dodging and other illicit financial activity. It applauded the activist community’s achievements (significant but still limited) over the past decade in increasing the political will to build beneficial ownership transparency systems, or BOT. It also noted a related increase in investor interest in the environmental, social, and governance aspects of corporate activity. Anticorruption, after all, ought to be understood as a central aspect of good corporate governance—the “G” in ESG.

The anticorruption community’s vision includes uncovering that $50 trillion in hidden wealth and recovering the nearly half-trillion dollars each year in dodged taxes. As one example of how the latest digital science—when married up with BOT activism—can actualize that vision, the Tech for Transparency report walks through six stages in a typical “data journey,” noting significant practical obstacles along with potential scientific solutions.

One example: The data collection stage is often accomplished through “know your customer” and “customer due diligence” rules. But the next stage—data quality assurance—has built-in problems. If investigators suspect that Mickey Mouse is not actually a shell company’s ultimate beneficial owner, for example, AI/ML can triangulate government-gathered data with Big Data and other sources to yield an identification in which regulators may have a significantly higher level of confidence.

Radically greater efficiency at the data-sharing stage is another example. The data analytics stage is perhaps the most extraordinary; cutting-edge pattern recognition can enable law enforcement to cut through a tax avoider or evader’s carefully manufactured complexity and opacity with exceptional speed and accuracy. The list of obstacles and their solutions goes on. 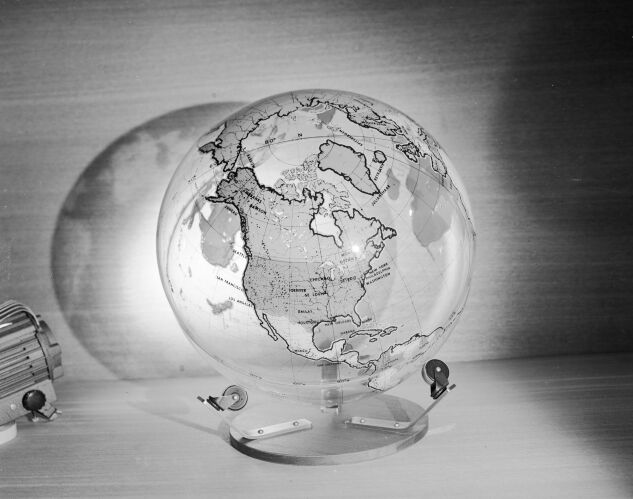 Circa 1955: A transparent globe made by the Farquhar company of Philadelphia.

Blockchain in Every Port… and Other Ideas

Specific suggestions for early action are included in the report, which issues “invitations to action” to catalyze widespread, decentralized collaboration between the data science and anticorruption communities.

Criminal misinvoicing of global trade, which focuses on the global shipping industry, is easy for bad actors, because historic data silos can’t prevent port-to-port falsification of the identity and value of goods. This $800 billion per year problem enables trade-based money laundering and trade fraud, including evasion of customs duties, VAT, and other taxes. The report suggests a simple solution—implement blockchain in every port so nobody can lie about what’s on the ship—and seeks to catalyze collaborative scientific and political action to accomplish it.

Today, there’s an exciting convergence of achievements in technology and activism that create an extraordinary opportunity to overcome the sophisticated antisocial infrastructure that the tax avoidance community and its enablers have built. Tech for Transparency is just one of several efforts highlighted at the recent IACC conference.

I focus on this initiative only because I know it well. The idea for this initiative occurred to me while participating in a June 2022 symposium sponsored by the Prosperity Collaborative that centered on MIT professor Sandy Pentland’s book, “Building the New Economy: Data As Capital.” After the symposium, teaming with new work colleagues, we assembled a workgroup, developed the report, and presented our findings at IACC.

It is essential that many people respond in their own ways to this opportunity, because the problem is much bigger than tax avoidance. Variants of the intellectual infrastructure for tax avoidance also serve criminal tax evaders, extractive dictators, global narco-criminals, arms traffickers, money launderers, terrorism financiers, and other bad actors engaged in a range of illicit financial flows. It’s time for engaged citizens of the world—members of both the scientific and activist communities—to collaborate to end this scourge.

This is a regular column from public interest tax policy analyst Don Griswold, who’s also a senior fellow at the Digital Economist. Look for Griswold’s column on Bloomberg Tax, and follow him on LinkedIn.

Laying the Groundwork for the Next Wave of Growth

Do You Know the Difference?